Nov 2014 (Macedon Ranges, Victoria) Australia
Great Gisborne Gazette Nov 2014 edition.
Asbestos cancer survivor in international award
Louise Williams is a long term survivor of mesothelioma (asbestos) cancer and is currently undergoing further chemotherapy.
But earlier this year she was able to travel to the US to accept an award for her advocacy work.
The Asbestos Disease Awareness Organisation presented Louise with the Alan Reinstein award at a conference in Washington in April.
Louise is social media spokesperson for Asbestos Diseases Foundation Australia and Australian Director of Global Ban Asbestos Network and works hard to raise awareness of asbestos diseases.
Asbestos is a killer. Louise says that in the early 1900s it was known that asbestos was a carcinogenic ............. 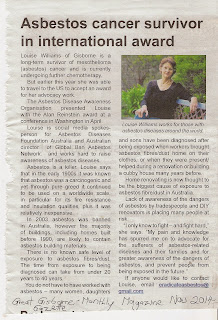 "I only know to fight - and fight hard"she says.  "My pain and knowledge has spurred me on to advocate for the sufferers of asbestos-related diseases and their families and for greater awareness of the dangers of asbestos, and prevent people being exposed in the future".
Posted by Unknown at 3:11 AM