ASEA (Asbestos Safety and Eradication Agency) hosted Australia's inaugural international landmark Conference on Asbestos Awareness & Management at Crown Convention Centre, Melbourne, Victoria, Australia 16 to 18 November 2014.  A fabulous conference bringing delegates on a global scale together in unity.  There were over 260 delegates from five countries who attended the conference.

Keith (my husband) and myself were very proud and honoured to attend this conference for the 3 days.  Sunday 16 November 6pm  to 10.30pm a welcome reception where Geoff Fary (Chairman ASEA) welcomed everyone and also with a great speech outlined how the conference would proceed on 17 and 18 November.  It was a very informal reception where guests mingled and enjoyed getting to know each other and rekindle old and new friendships.

Day 1 - Monday 17 November 2014
Matt Peacock was the facilitator for the conference and did a great job of introducing all the speakers. 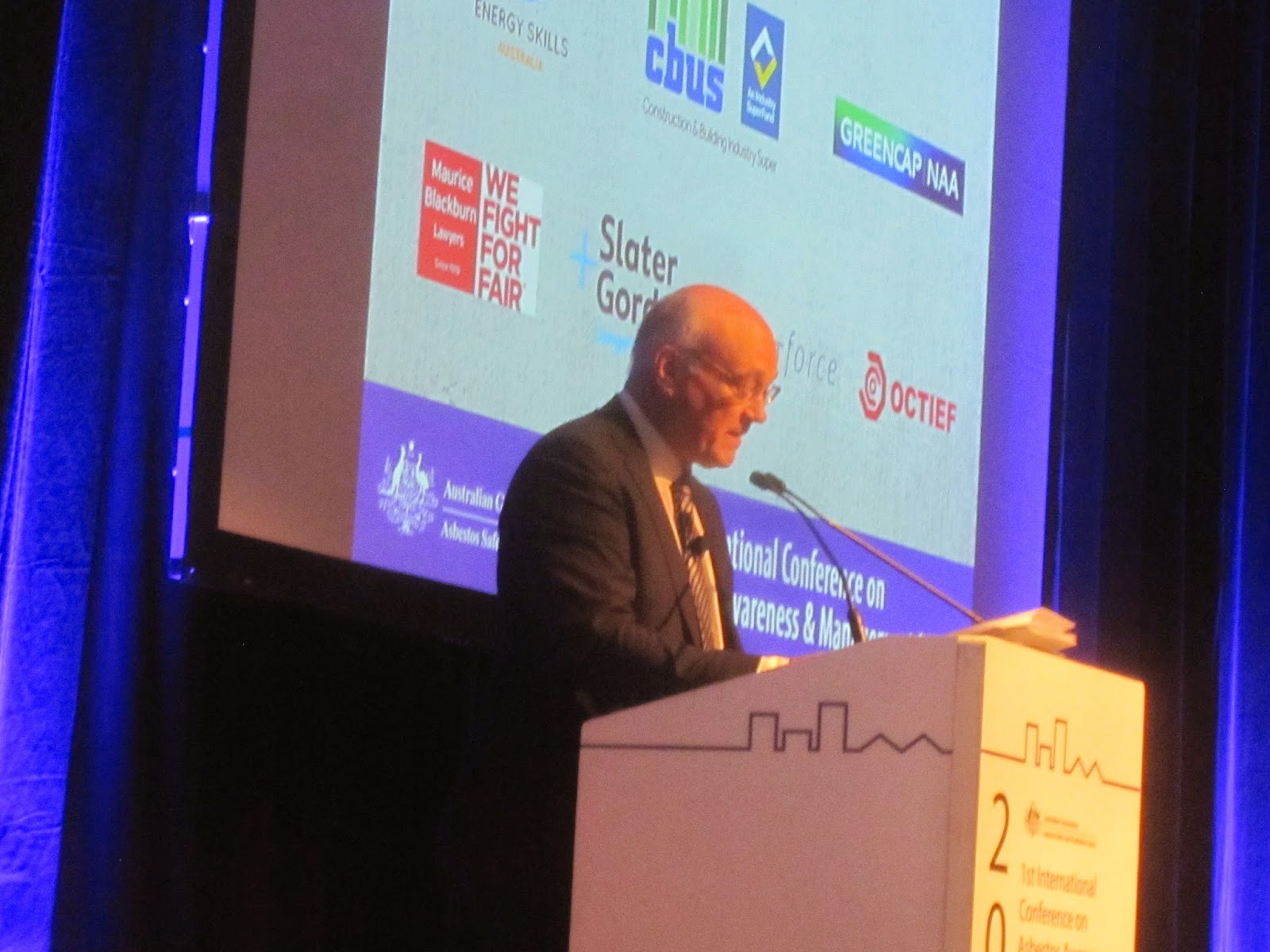 
He introduced me as a victim of asbestos and a video was played in the background.
Lou Williams giving a very moving video address at the 1st International Conference on Asbestos Awareness & Management in Melbourne. Lou's father died from mesothelioma and Lou is fighting the disease. Peter Tighe noted that Australia's mesothelioma death rates are on par with our national road toll. We don't talk about it!

https://www.youtube.com/watch?v=k_I7ziChDC0
(the above link is to the video) 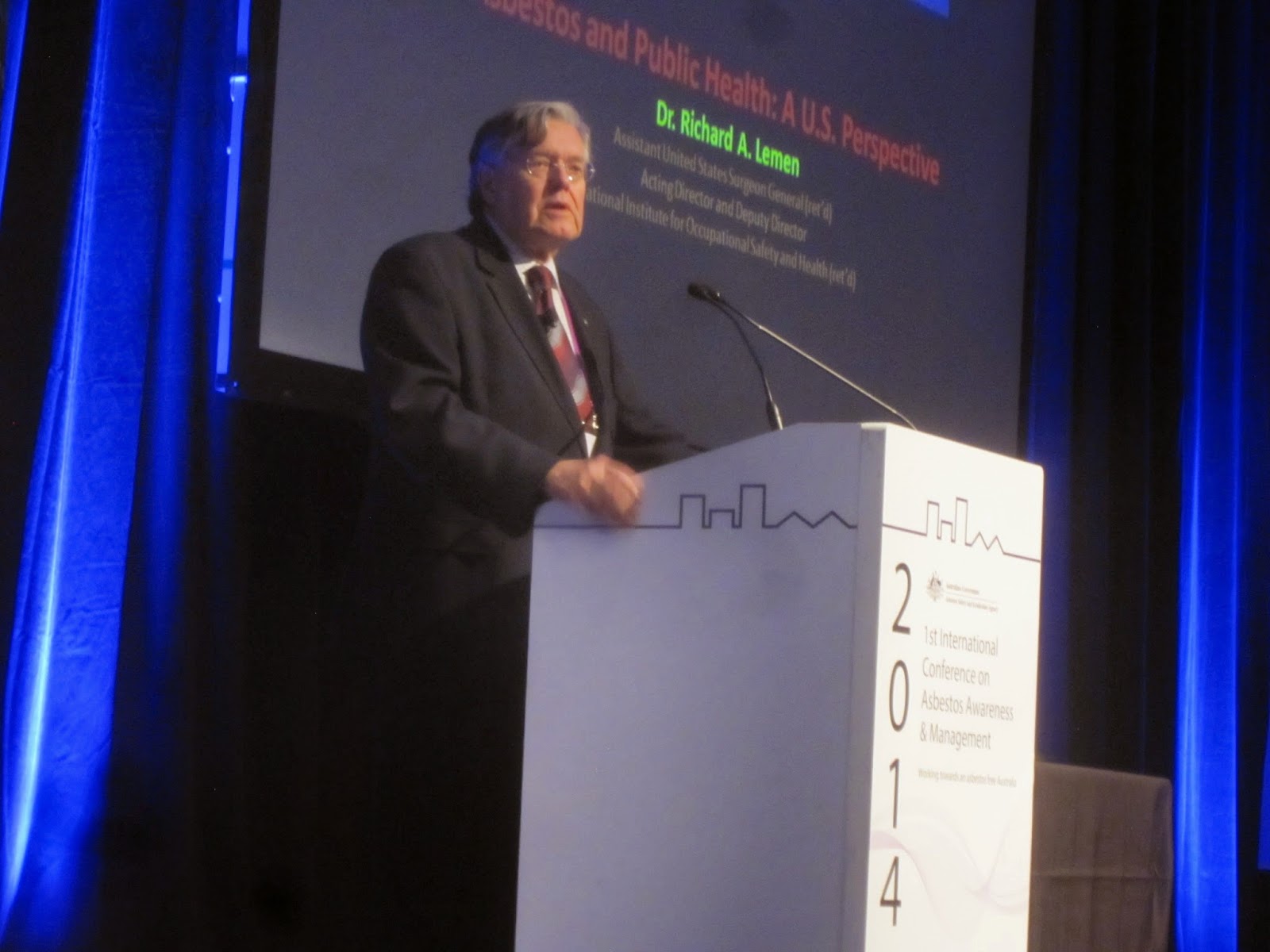 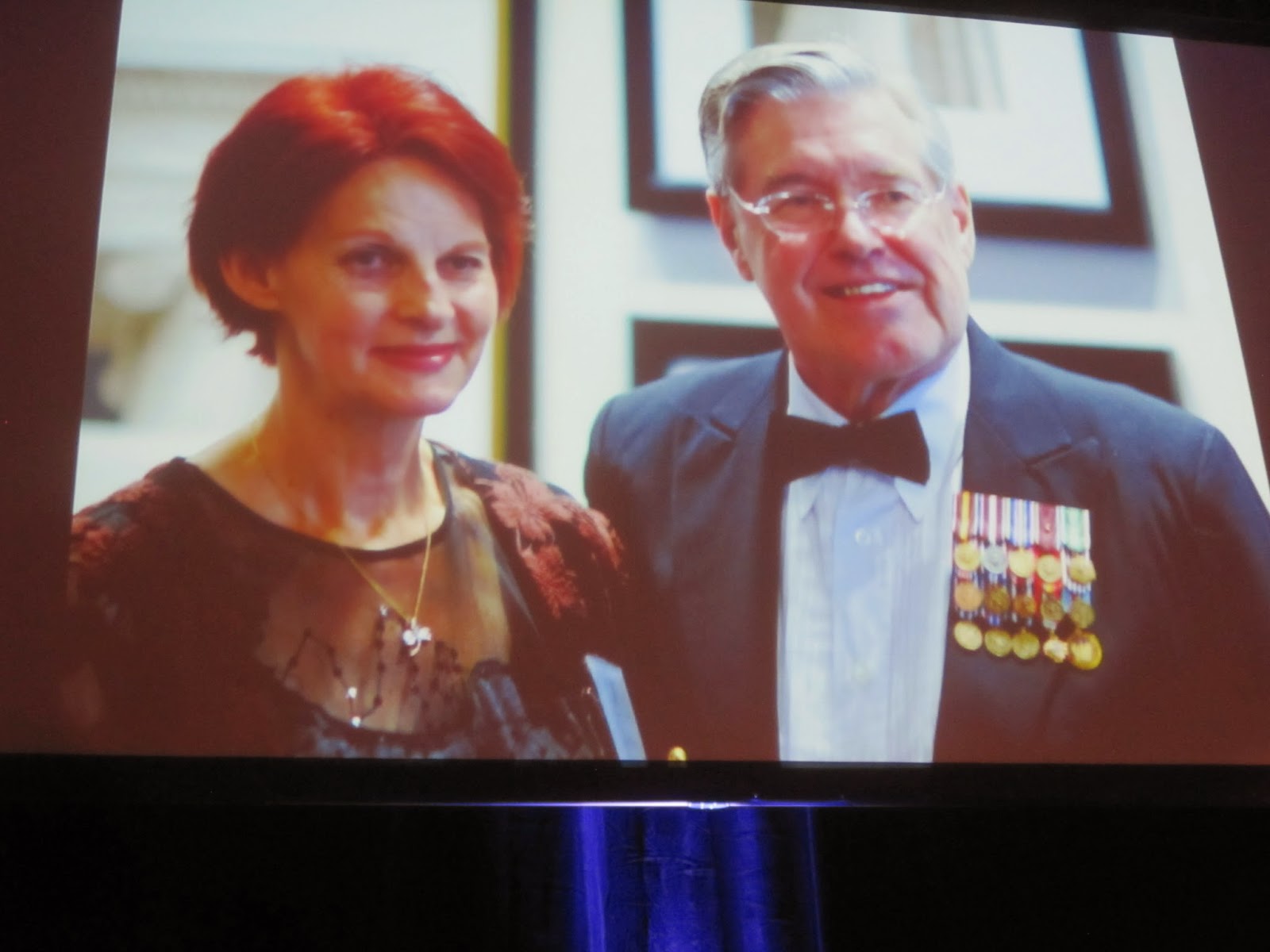 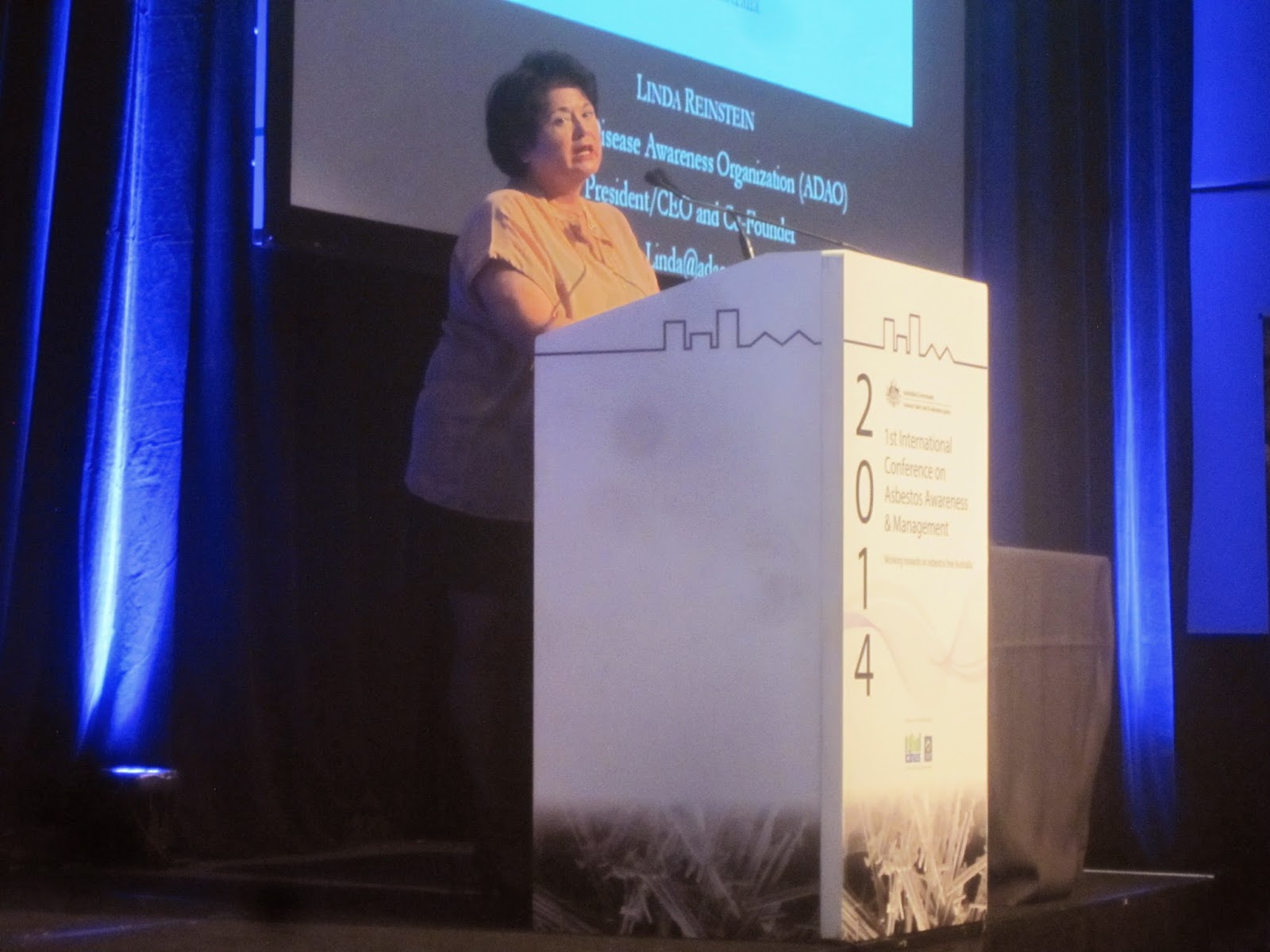 (In the other sessions the topics were Litigation trends in Asbestos related diseases, Case study Mr Fluffy with Brianna Heseltine and Removal & Disposal).

6.30pm to late - the Conference Gala Dinner venue: Palladium at Crown Convention Centre, Melbourne.
We were sitting on the main table with Peter Tighe, MC Max Walker, Kevin Sheedy (guest speaker) and Trevor Gillmeister - Taking an Axe to Asbestos: Walk for Awareness who lost his dad to mesothelioma and decided to do a walk to raise money for awareness.  Trevor presented a video that was great to watch and spoke about his amazing walk with Max Walker.

A wonderful night of relaxing, enjoying the varied speakers and good food/music.  A night that I wanted never to finish!  However by 10pm I was exhausted and went back to my room .... however Keith decided to stay on until about 12.30am and enjoyed the night catching up with everyone.

The conference ended at 5pm with a panel discussion
Where to from here? What can be done domestically and internationally - developing the communique.  Followed by summary and conference close.
http://www.canberratimes.com.au/act-news/international-conference-says-nsw-must-follow-act-governments-mr-fluffy-asbestos-demolition-20141119-11pjdz.html
The first International Conference on Asbestos Awareness and Management has recognised the ACT government's decision to demolish all Mr Fluffy homes as the only viable option to eradicate the deadly risks posed by loose fill asbestos.
The conference issued a strongly-worded communique on Wednesday morning following the two-day Melbourne event, which drew government officials, international and Australian asbestos medical experts, health care professionals, community groups, victim support groups, industry bodies and unions.
The communique stated "it is the consensus of all delegates that all forms of asbestos fibres kill and the only solution is to eliminate the sources. There is no known safe level of exposure to asbestos. This conference finds no scientific evidence to support the concept of controlled use advocated by some in the asbestos producing industry."
"Controlled use" is a method argued for by international asbestos exporters in Russia, China, Canada and other countries to justify their sale of the deadly carcinogen to developing countries like India.
Having heard evidence from Mr Fluffy homeowners and ACT government representatives on the presence of amosite asbestos insulation in more than 1000 Canberra homes - with between 50 and 60 per cent having fibres detected in living areas - the ACT government was described as a world leader on safe practice for its October 28 decision to spend $1 billion demolishing these homes.

Recognising examples in other countries where government action was forced through litigation on asbestos disease, conference delegates endorsed action by the ACT government to end the risk to the community, potentially heading off years of protracted legal arguments.
Conference delegates also lent support to a uniform national response.
"The Australian Capital Territory government's response to demolish Mr Fluffy homes is acknowledged as the only enduring solution to the ongoing risk posed by loose fill asbestos insulation and the conference commends this approach to other governments," they said.
Federal Asbestos Safety and Eradication Agency head Peter Tighe said the clear implication was the NSW government needed to identify and demolish an estimated 60 Mr Fluffy homes across the border in NSW.
"I believe they don't have any other option," Mr Tighe said.
He noted the situation in NSW was even more pressing than the ACT, as homes had never been remediated and still contained full quantities of Mr Fluffy amosite.
In 1999, the Commonwealth spent $100 million cleaning the roof cavities of more than 1000 Canberra homes. But in February the ACT government conceded ACT residents still faced the risk of remnant fibres migrating into their living spaces and it wrote to homeowners warning them of this fact.
NSW was not included in the remediation program and the NSW Government called an inquiry in August into Loose Fill Asbestos Insulation, chaired by the Reverend Fred Nile.
The committee conducted a public hearing in Queanbeyan on Monday but is not due to report to government until February.


Lou's comment - a fabulous and very informative conference bringing asbestos expertise to the forefront in Australia on a global scale.  Thank you ASEA for having the initiative to host this conference and put Australia on the worldwide map.  We are leading in so many ways the asbestos fight and with helping our Asian neighbours to ban asbestos in the future through training and workshops/consultation etc we will ensure that our knowledge is not in vain!  I look forward to the next conference!
Posted by Unknown at 4:23 AM