I was asked by ADAO to become a guest blogger and blog about my journey from Australia to Washington, DC.  I fly out on 2 April 2014 - 3 sleeps! 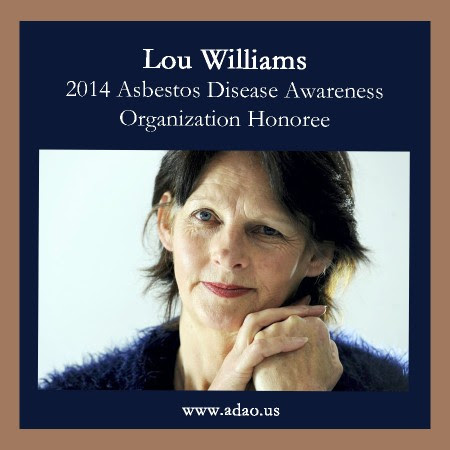 I am so excited to be well enough to fly and attend the 10th Annual International Asbestos Awareness Conference, “Where Knowledge and Action Unite” on April 4 – 6, 2014 in Washington, DC. I will be also guest blogging for ADAO about my journey, feelings, and experiences so each of you can join me.

When ADAO contacted me last year (2013) and asked if I would accept this award – I was just so humbled by being asked to accept an award!  I thought to myself  ‘Why should I be singled out to accept an award when there are so many other warriors who are more deserving than myself!

It truly is an honour to accept this award on behalf of all other brave and beautiful warriors who are not able to have a voice anymore, and one of those warriors was my dear father who lost his life in 1985 to Mesothelioma.

The fight continues to ban asbestos on a global scale.   America still has not banned asbestos!

We still have a long fight ahead of us for a worldwide ban on eradicating asbestos.  Small steps like coming together in unity at 10th annual ADAO’s asbestos conference goes a long way in promoting unity, awareness, education and support for each other to join forces and march onwards until asbestos is banned/eradicated entirely from the world!

I’m off to pack and will write again on Monday.

Louise (Lou) Williams BLOG Asbestos – Living with Mesothelioma in Australia
Lou Williams – Asbestos Awareness, Information and Support Officer – Bernie Banton Foundation
“Lou Williams is the Asbestos Awareness, Advocacy awareness, Information and Support Officer with – Bernie Banton Foundation. Louise (Lou) Williams, is a mother, a grandmother, wife, and lives with the ‘asbestos’ cancer mesothelioma. Lou lost her father aged 54, in 1985 to pleural mesothelioma. Since then she has been passionate and dedicated in raising asbestos awareness, advocacy and support both in Australia and globally.
In 2001 she was diagnosed with peritoneal mesothelioma and bravely fought that with extensive surgery and chemotherapy. Unfortunately in 2009 she was then diagnosed with pleural mesothelioma, which required major surgery & extensive chemotherapy.
Her battle is never ending, and quite often unforgiving, throughout Lou is a very positive lady, her strengths shine through with her giving of hope, love and support to victims and their carers.

In June 2013 Lou was awarded the Asbestos Disease Awareness Organisation‘s (ADAO), 2014 Alan Reinstein Award. This award recognises Lou’s commitment to education, advocacy and support to countless patients and families around the world.

Lou has served on boards of anti asbestos support organisations since 2003, and is a valued member of the Bernie Banton Foundation team, serving as the Asbestos Awareness, Information and Support Officer.”